Where Does All that Kona Rainwater go? To the Underground Estuary of Course.

When we travel up the hill from the Kona low lands at about 800 feet of elevation, hints of greenery start to show and by the time we hit 1500 feet, it’s verdant green. Welcome to the Kona Rain Belt. Warm moist summer air rises during the day and driven by the onshore Kona breeze the moisture hits cold air aloft, clouds form, and it may rain. Sometimes it pours if even for a just a short while. Less than a mile North of South of the downpour it can remain dry. The mountain makes its own weather. Depending on the location, some sites get over 80 inches of rain per year. Other sites receive 40 inches and less. Down along the dry Kona Coast 20 inches per year or less is quite common. 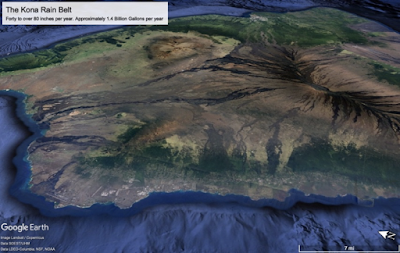 In a typical year, the greater Kona Rain Belt might get billions of gallons of water. That is enough water to fill 2000 Olympic sized pools every year. Thus, the question to be entertained might be, where does all that water go?

The Hilo side of the island has over 200 streams and creeks. Many of them flow all year. How many full-time rivers do we have on the Kona area? One and it can become a notorious storm flood channel flowing from Holualoa. So mostly without creeks and streams, where does all that water go?


Hawaii Island is a youngster and especially on the Kona side soils are poorly developed and the fractured lava and basalt rock with its myriad cracks, crannies, and fissures, are water expressways, going down. All that water flows quickly, out of sight, out of mind, never to seen again, yet maybe experienced uniquely.


Go for a swim or snorkel anywhere on the Kona Coast, and you are likely to encounter and "oh so cold" spot in the sea. Swim a bit, and the water returns to its warm temperature. If you are snorkeling the visibility at the surface is distorted in that cold spot. What was encountered was brackish water flowing from the land into the sea. Its colder and less dense than seawater and the mix of densities distorts vision. Dive down a few feet and the visibly improves. This brackish groundwater floats on sea water and accounts for the cold visual disturbance. Recall wondering where all that mountain rainwater went? Here it is, after its journey flowing downhill to the sea.


Dr. Craig Glenn and his associates at the University of Hawaii study the groundwater in Kona and call it a subterranean estuary or SE. The concept of an estuary is distinct from the common myth that groundwater is an underground river of entirely fresh water that flows, one way, into the sea. 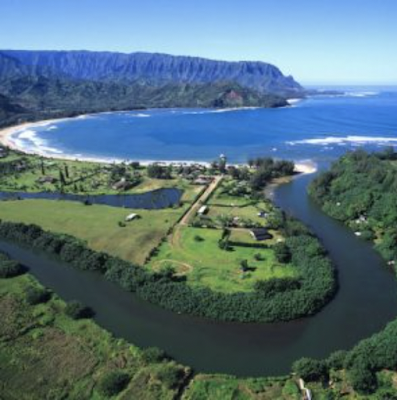 Instead, an estuary is defined as “a partially enclosed body of water, and its surrounding coastal habitats, where saltwater from the ocean mixes with fresh water from rivers or streams. In freshwater, the concentration of salts, or salinity, is nearly zero. The salinity of water in the ocean averages about 35 parts per thousand (ppt). The mixture of seawater and fresh water in estuaries is called brackish water, and its salinity can range from 0.5 to 35 ppt. The salinity of estuarine water varies from estuary to estuary and can change from one day to the next, depending on the tides, weather, or other factors” (Levinton, 1995.)

Pictured is the Hanalei River Estuary on Kauai. This estuary like most works in a see-saw fashion. Upslope rainfall generates the river currents. The tide pushes back and then six hours later subside, and the forces of the river take over. This tidal flux going in and out four times a day and greatly amplified during the monthly Spring Tides mixes the river and seawater into a unique physical and biological environment that supports life.

In Kona, our estuaries are underground A subterranean estuary is one simply below ground level. It can be seen at many locations along the Kona Coast where the roof of a cavern is fallen in revealing a cave filled with cold brackish water that rises and falls with the tides. We call them “Queen’s Bath” and the larger open one's Anchialine Ponds. 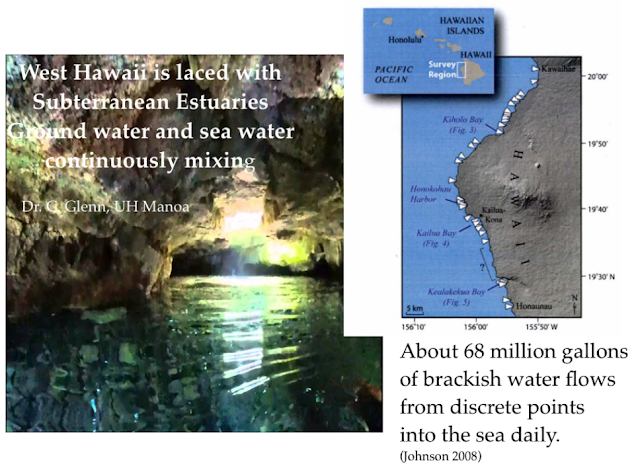 Dr. Glenn states, "For each mile of the Kona Coast between 1 to 3 million gallons of water flows into the sea every day. That water once fell in the Kona Rain Belt and has been flowing toward the sea ever since. The rivers and creeks common to the Hilo side are here they are just underground and range in size from tiny cracks to huge lava tubes.

This diagram accurately represents the subterranean estuary of the Kona Coast. Notice that the freshwater "lens" does not extend to the shore. That is why our drinking water wells are well inland and up in the hills. It is where the "lens" is thick and can be pumped with less seawater contamination.

Data collected by the USGS for studies conducted on our groundwater and data provided by NELHA indicate the SE is changing. Both sets of data indicate brackish water is advancing. Seawater intrusion is well documented global concern. It arises as fresh groundwater is pumped for domestic use and thereby reducing the flow of freshwater to the sea.


The Keauhou "Aquifer" system is within the Kona rain belt. Recent reports indicate that about 15 million gallons per day (MGD) of fresh water pumped every day. About 10 MGD is domestic usage. The calculated Sustainable Yield is 38 MGD (County of Hawaii DWS 2018). That which is not pumped to the surface becomes groundwater flow and ultimately becomes part of the SE.

The data below is from a test well at NELHA (CEMP Report 2018) located near the old road NELHA junction to Queen Ka‘ahumanu Highway. It shows the salinity in the groundwater doubling over the last 20 years. This is not an immediate concern for the mountainside drinking water wells. It does indicate the scale of ocean water connection under the land is increasing. This may facilitate the transport of pollutants to the sea as more and more of the 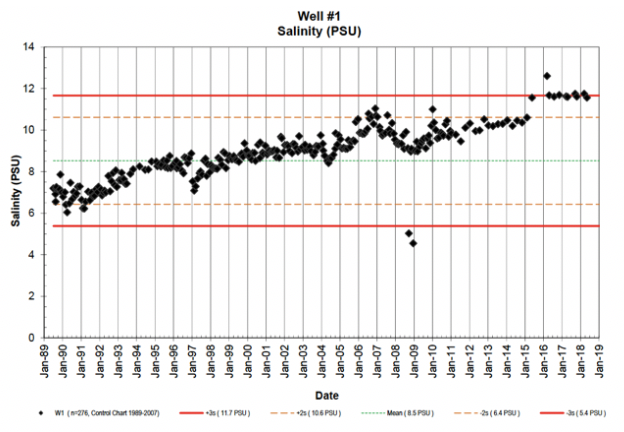 sustainable yield is pumped for domestic usage. Since most of the domestic water is disposed of in onsite waste systems (Cesspits and Septic Systems) with the continuation of these practices, as the population grows, a more substantial proportion of the groundwater flow will be untreated human wastewater. Such wastewater contains nutrients and microbes that will be conveyed to the SE. As Lau and Mink pointed out in 2006, "the coastal waters will continue to be the ultimate sink for wastewaters..."

UH, scientists can show us where along the coast where the largest SEʻs exit the land. SE water is a few degrees cooler than the open ocean and is readily seen on infra-red photography. The aerial IR photo below is an excellent example of such a point source discharge of the SE (Peterson 2009). 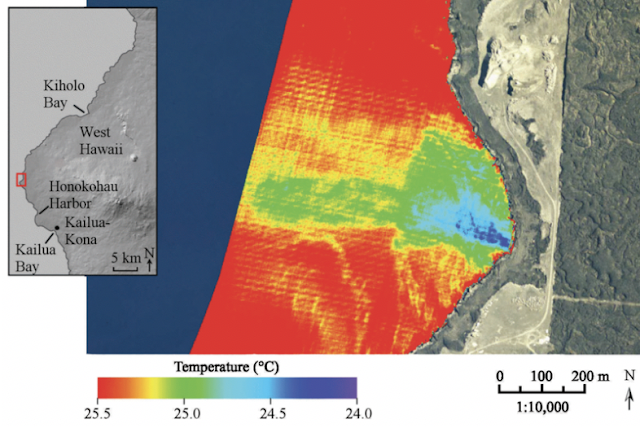 In many coastal regions of the world, fresh groundwater flows along rock strata toward the shore. In this case, the water flows or seeps out of the rock and falls to the coast. In this situation, no estuary is created. Where this happens along a river or coastal bluffs, vested interests argue the seeps with pollutants cannot be regulated. Unfortunately, that assumption is extended to the islands.

Pictured is a bluff along a Southern California beach. Water from inland rainfall
seeps along the sandstone rock interface and falls to the shoreline. 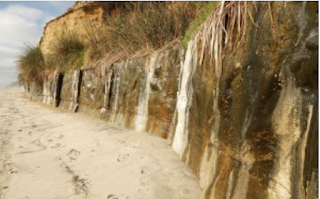 Common sense and a simple understanding of island hydrology becomes an "inconvenient truth." The truth is all underground discharges of wastewaters will eventually flow in the subterranean estuary and into the sea.

Homeowners, businesses, and local government relish the inexpensive underground disposal of wastes. Home cesspits, septic systems, hotel and condo injection wells and county "seepage pits" have been explicitly and implicitly approved by the State for many decades. In no case, did the government account for the fate of the wastewater. We often hear officials proclaim; we only do what the State approves. This naively assumes the state would never permit something that is harmful to the environment

Fortunately, this wishful naivete has been taken to task in the Federal Courts. Briefly, the judge and the appellate courts found that wastewater injection wells on Maui were adding nutrients to the nearshore waters and fertilizer effect of the nutrients harmed the coastal ecology. Simply stated, Maui County violated key provisions of the Clean Water Act of 1972.

It was the subterranean estuary behaving just like an above ground estuary that conveyed the pollutants to the sea. Had the county been dumping wastewater via a pipeline to the sea, they would have been "busted" a long time ago. As the judge pointed out, the underground water flow was equivalent to a pipeline and just because it is a natural feature does not exonerate the county.

It was scientific data collected by UH scientists that educated the judge about our subterranean estuaries. Common sense informs us about water flowing downhill. It is scientific data, not common sense that reveals how our underground water systems work. In that knowledge, will we understand that an estuary is under our feet? Given that responsible people would never dig a wastewater ditch into the Hanalei Estuary, will that same knowledge and responsibility inform and alter the way we manage our wastes while living on top of an estuary?

Next time you are in a torrent of rain up Mauka of Kona, and experiencing the restoration of our water supply, be reminded of our Hawai‘i Constitution, that states all resources are held in "public trust."

“For the benefit of present and future generations, the State and its political subdivisions shall conserve and protect Hawaii’s natural beauty and all natural resources, including land, water, air, minerals and energy sources, and shall promote the development and utilization of these resources in a manner consistent with their conservation and in furtherance of the self-sufficiency of the State. All public natural resources are held in trust by the State for the benefit of the people.” Article IX


We live on an island; however, some people prefer to act Hawai‘i is like the mainland. As one lost girl once said, "Toto, I have a feeling we are not in Kansas anymore."

Where Does All that Kona Rainwater go? To the Underground Estuary of Course. R.H. Bennett Ph.D. Applied Life Sciences, LLC
Creative Commons, CC BY 4.0. Free to use, distribute and copy with the citation above and Healthy Hawaiian Oceans
WWW.H2OKona.org

For more reading on our water system and the subterranean estuary, please see, and for more on our water issues go to www.h20kona.org

Peterson, Richard N., William C. Burnett, Craig R. Glenn, and Adam G. Johnson. "Quantification of point‐source groundwater discharges to the ocean from the shoreline of the Big Island, Hawaii." Limnology and Oceanography 54, no. 3 (2009): 890-904.