Splenda may solve our problem.

The coffee and tea drinkers that like it sweet but don't use sugar are giving us a handle on a greased watermelon that has slipped through our hands for decades.   The artificial sweetener Splenda may turn to provide a marker of wastewater and sewage that “flows” into the environment.  Sweden, Arizona, Maine, and Florida scientists confirm that Splenda, Sucralose is a reliable wastewater indicator.  Our work, slated for this fall, will likely show the assay reliable in Hawaii too.

In this era of great scientific achievement, we can identify a single gene on one strand of human DNA.  Advanced analytical methods can detect toxicants as low a few parts per trillion in water or food. ( one part per trillion is one second in 31.7 thousand years)  Molecular proteomics can detect tumor proteins long before an MRI will ever visualize the tumor.

Given these exceptional abilities, it would be reasonable to expect we can detect traces of sewage in the waters of Hawai‘i; paradoxically we cannot. It has been that way for almost four decades with no advances. Confirmation of a sewage spill or leak still requires a visual assessment.  Alternatively, we assume elevated levels of Indicator Bacteria reveal sewage contamination.  Unfortunately, all the bacterial indicators used over the last  100 years are replete with false positives and negatives for the assessment of pathogen presence in water (Noble 2003).

The currently used official indicator test for the bacterial genus Enterococci is written in stone in both Federal and State law.  Refer to Colford (2012) for a detailed review of the shortcomings of the Enterococci test to predict illness risk.  In short, the test has one chance in two for detecting sewage pathogens in surface waters without known sewage outfalls like the one at Sand Island Oahu.  Would we feel safe driving our cars if the break failure indicator light only worked half the time?

Water quality researchers have taken several approaches to find a valid sewage contamination indicator.  Fairly recently, certain pharmaceuticals, caffeine, and nicotine metabolites showed some promise. However, most do not persist across the vast array of sewage processing and disposal technologies.  Sewage treatment operates processes to break down the components of sewage and the indicators are typically not resistant to degradation.

A reliable indicator must persist through most treatment processes and endure over time.  They must resist photodegradation from sunlight, and they must resist microbial decomposition.  A valid indicator must not cross-react with other chemicals in the sewage milieu and create false positives.

Advanced microbial detection of human fecal pathogens using DNA/RNA technology shows much promise and precision. Both  PCR and Nextgen sequencing offers excellent precision and accuracy. However, the technique requires a commercial laboratory equipment expertise that is not currently available. The biggest problem is the long turnaround times needed to produce actionable data for the regulatory agencies.

Sucralose as an ideal Indicator: The Evidence

The artificial sweetener Sucralose (Splenda) is a very widely used sugar substitute. It is an ingredient in over 4000 consumer products worldwide.  It is a simple carbohydrate; however, it has three chlorine molecules attached.  As a chlorinated carbohydrate, it is not digestible and not metabolized by bacteria in the gut or the environment. 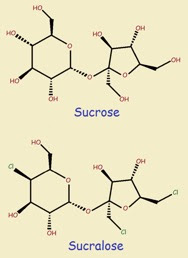 In the figure below, its chemical structure is similar to table sugar, sucrose, yet note the three chlorine molecules (green).  As such it is a member of a class of chemicals called chlorinated organics.  This class of compounds tends to be very stable and persistent in the environment.

In humans ingesting Sucralose, it is poorly absorbed, and the mean residence time is 19 hours.  Half-life is 13 hours.  Most is excreted in the feces, 78% and 15% in the urine. It is mainly excreted unchanged. Only 2.6% is excreted as a glucuronide conjugate (Roberts 2000).

In waters receiving wastewater in any form, Sucralose exists in fresh and marine waters.  Extensive studies in Sweden Sucralose show 400 to 900 ng/L downstream of a wastewater treatment plant Upstream it was less than 4ng/L (the minimum detection limit or MCL) (Brorström-Lundén (2008).  Sucralose testing in the open ocean and the marine waterways of Florida demonstrated its wide distribution. In the ocean waters of the Florida Keys, Sucralose was routinely detected at concentrations ranging from 147 ng to 393 ng per liter (Mead 2009).

In a recent Florida study, Sucralose levels above the MCL was detected in 78% of the samples, from slightly brackish to marine waters, ranging from 8 to 148 ng/L. A treated wastewater ocean outfall tested at 8414 ng/L in the Miami area (Batchu 2013).  These data confirm the assay method is sound for very diluted Sucralose in environmental waters.

Since estuaries in the United States are commonly used for both direct and indirect discharge of treated and untreated wastewater, questions about the suitability of using Sucralose as a wastewater proxy in estuaries may arise.  The question is answered by a recent study in the Narragansett Bay Estuary in Maine.  Researchers found that Sucralose was readily detected in estuarian waters. Sucralose concentrations had an r2 = 0.88 correlation with salinity (Cantrell 2019).

Among the numerous chemical markers of sewage, including pharmaceuticals and other artificial sweeteners, Sucralose has the advantage of wider distribution and environmental persistence.  It is the preferred chemical indicator for sewage, wastewater, septage and cesspool leachate. In time, Sucralose may become the preferred indicator for the presence of fecal bacteria and virus. One study in a tropical urban environment demonstrated that Sucralose concentrations had the strongest correlation with the common sewage indicator bacteria counts over other chemical indicators.  The correlation values ranged from 0.40 to 0.47 (Ekklesia, 2015).  The low R values are attributed to the lack of precision in the bacteria test methods and not the chemical assay for Sucralose.

Sucralose is available in pure analytical grade making most any assay for it highly confirmable. The preferred analytical method is one that is precise and accurate while being rapid and lower in cost.  The technique developed by Batchu et al. (2015) includes online solid-phase extraction coupled with orbitrap high-resolution mass spectrometer.  This 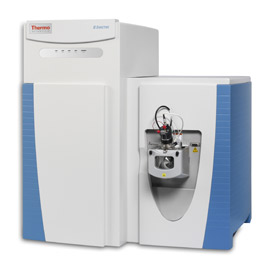 The HRMS method is capable of discriminating between sucralose molecules that differ only by the deletion of one chlorine molecule.  Thus, its precision and accuracy allow detection of Sucralose down to 1.4 nanograms per liter (minimum detection limit).  A nanogram is one billionth of a gram. A billionth is three seconds in one hundred years.

This means even very little Sucralose diluted in household wastewater, then further diluted, in sewage and then even further diluted in nearshore ocean water is detectable. Mawhinney (2011) describes sucraloseʻs presence in drinking water systems, including the point of consumption.  These researchers used another method of detection and obtained excellent precision and accuracy with this second method.  It further attests to the validity of Sucralose as a wastewater indicator

But some may ask how precise the assay is?  As it turns out, Orbitrap High-Resolution Spectrometry is very precise (Hornshaw 2015).  As can be seen in the chemical structure diagram, Sucralose has three chlorine molecules.   What will this assay detect if we add some faux sucralose, one that has only two chlorine molecules?   The assay can distinguish the two chlorine faux sucralose form the three chlorine real thing.  This means the likelihood of a similar molecule becoming a false positive is highly unlikely.

The concepts of precision and accuracy may be a tad foreign.  The target analogy is a simple way to understand the terms.  The assay for Sucralose fits the pattern in the lower right.  The assay detects the amount correctly and does so consistently.  It is accurate an precise.  Reliable data derives from the type of assay technology and proper calibration with each use. 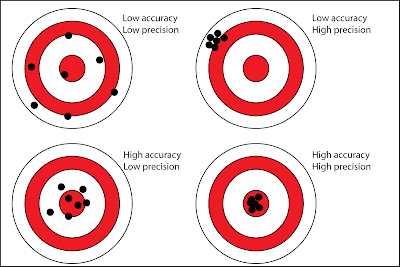 Given that two Sucralose assays demonstrate accurate and precise measurements and given that Sucralose is reliably detected in waters and climates from Sweden to Arizona, the assay is validated.

What is needed now to enable Sucralose for the official EPA wastewater/sewage indicator in a human epidemiology study.  Such a prospective study could be conducted at a major urban beach to determine recreation water exposure.  Exposures such as wading vs. swimming vs. surfing associated with post recreation illnesses, including GI, skin, eye, and upper respiratory diseases.   The theory being Sucralose is present when wastewater is present.   Sucralose is stable, not inactivated by sunlight UV.  The concentration of Sucralose in recreation water may be directly proportional to the concentration of human virus and bacteria capable of causing disease.   This type of research is costly, yet an excellent investment in finding more effective means to monitor recreation water microbiological safety.  In Hawai‘i that is rather important, to say the least.

Hornshaw, M. (2015) Why is the Orbitrap Mass Analyzer so Amazing? http://analyteguru.com/why-is-the-orbitrap-mass-analyzer-amazing/