Part II.  Alternatives to Conventional Septic Systems.  It’s the water!
R.H. Bennett Ph.D. Applied Life Sciences LLC
Healthy Hawaiian Oceans: H2O
It is the intention of this second part of the discussion about cesspools and septic systems is to look beyond what is the norm and endorsed by regulatory agencies. This conventionalism creates dichotomous choices in an attempt to meet the EPA mandate to phase out cesspools and cesspits in the state.
For the most part, civil engineers staff most state and federal agencies tasked with regulating private and public wastewater systems.  This expertise is about the mechanics of waste treatment based in part on antiquated and nonvalidated assumptions about the performance of a septic leach field.
Civil Engineers by their discipline and training are not scientists, but technicians.  Confounding this limitation to creativity skills is the onerous structure of the regulatory system for those employed there.  These government engineers operate within the constraints of administrative rules that implement the public law.  This reality overlays a dominant risk-averse conservatism.  It has been said by many agency engineers, I can only do what the rules allow, and budgets permit. With no significant constituency advocating a change in laws and regulations, we have a triumvirate of forces that virtually guarantee the future shall be defined in terms of the past.
Stepping out of the Box
So with the power of a few keystrokes, the triumvirate of anti-creativity is for the duration of this conversation, summarily set aside. The cesspool or septic system conundrum is a false dichotomy.  The public policy says cesspits are unacceptable under the law.  Administrative rules and the force of tradition says, in effect, the only option is a septic system.  This error of logic is compounded by mythological assumptions about mystical geophysical and geochemical processes that occur underground in the buried leach field.
Previous blogs document what science knows and what it does not know about this underground magical waste processing. Instead, the intent here is to examine age-old engineering assumptions and raise questions where it appears these assumptions are part of the problem.
It’s the Water
The first outside the box assumption is all about water.  Hundred of years ago the flush toilet was a huge convenience and improvement over the stinky privy. The first flush toilet arose as a gift for the Queen in 1592 (1).  The indoor “Water Closet” became a feature in the castles of royalty. Freshwater was used to flush a few ounces of human waste away.  Water very efficiently removed the unsightly, odiferous material. It was gone and no longer offended the senses of the elite.
Poop was now out of sight and out of mind. That had to be about miraculous.  Those fortunate to have a real toilet were no doubt the envy of millions of folks that suffered the risk of frostbite of the most “sensitive’s” on subzero trips to the outhouse.  Indoor plumbing was the symbol of affluence and through this affluence human waste seemingly disappeared.
Waste without Water.
There was a family, Dad, Mom and three boys born in the age of the Boomers.  All newer homes in this southwestern region had flush toilets.  At least the kids knew no other.  Sure there was stories and tales of the harrowing trips to the kybo, grandma would tell, but least for the Boomer Boys all they knew was the whoosh of the flush.
Father announced one day, we bought a cabin out in the desert wilderness.   The glee of excitement dampened upon the experience that weekends in the desert meant they all had to use the outhouse. It was a real Lua; a two holler, but no one wanted that kind of company.  After a day of use, the odor was gripping. Sometimes the more sensitive would merely refrain from enduring the olfactory terror until they got to the porcelain flush. 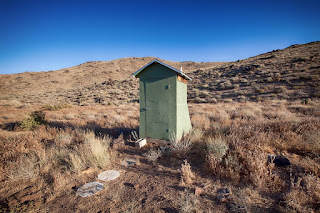 This dessert outhouse was fundamentally waterless.  Dad and the Boomer Boys took “right of passage” fun in irrigating rocks and such rather than enter the “gas chamber."
Let’s do a thought experiment. The outhouse, save the requisite additions of a few ounces of solid waste and urine is waterless.  Most months the daytime temperatures ranged from 80 to 110 digress F and relative humidity of less than 15%.  This is the meaning of dry.  Fecal waste is typically over 90% moisture. In this environment wastes dry out quickly, but too slow to abate the stink.   Ask then, what is the potential for the waste constituents to move downward in the porous sand and contaminate groundwater many hundreds of feet below?   Almost nil, correct?
Continuing the experiment, let’s install a 1960’s porcelain throne with a 3-gallon flush.  Water has become available.  A family now lives there full time and the cabin has a cesspit. The flush waster and wastewater from the house now about 280 gallons per day flows into the cesspit.  Will this water carry what it may deep into the underlying sand and rocks?  Absolutely.
The convenience of the flush creates and unseen and unrecognized liability.  The water has given the fecal solubles and microbes a river, albeit microscopic, and flow it does.  For the most part, this is the behavior of the modern cesspool and the septic leach field.
Composting Toilets Work and They Take Work.
Looking back to the outhouse days in rural America, some folks motivated by odor revulsion, tried all sorts of remedies from caustic chemicals to fodder.  Yes, old and moldy animal feed found its way into the latrine.  Something interesting happened.  The light, airy fibrous material provided a source of carbon and compost microbes while allowing air to penetrate the heap.  Walla, compost occurred.  The aerobic bacterial decomposition took over and out-competed the bacterial the don’t like air, and the odor producing anaerobes retreated.   This is the basis for the modern-day composting toilet.  With active management, they work well.   The problem is there a few of us willing to be active managers of compost toilets!  The compost has to be removed several times a year.  Any volunteers?  For more on Composting Toilets see (2).
Itʻs The Water
What is the point you may ask? The flush toilet is here to stay. Look at the table below.  This is how we use water.  Only about 20% is from the toilet.  It could be much lower.  The wastewater from all homes, not connected to sewers, finds its way to the cesspit or leach field and the water once again flows. It flows whatever it may, downward and outward. It will flow ultimately in search of its level, groundwater or the nearby shore.
What would happen if we used all that high-quality greywater and only put 1 gallon per toilet flush into our waste systems?   There would be less water, less force, and fewer microscopic streams.  Engineers and geologists call this force the hydraulic load.   The Hydraulic Loading Rate (HLR) has more to do with cesspit and leach field performance than the depth or nature of the soil at the site(3,4,5).  Reread the last sentence again.  The engineers extoll for virtues of soil and soil treatment as if that is the complete answer. Instead, the scientists say it the volume of water that is most important.

“HLR is directly associated with the wastewater applied to the “soil," but it is also an indicator of contaminant mass flux. The high flux of contaminants in the soil reduces the efficiency of contaminant removal and increases the chance of the pollutants reaching groundwater.

For the most part, an engineer will design more surface area for infiltration, aka the leach field, only for soils with slow infiltration rates.  These soils tend to be higher in clay content.  For rocky lava “soils” with almost infinite water infiltration capacity, the infiltration area may be just a small sump or a leach field with two short drain pipes.  Controlling the HLR and the infiltration rates is not design consideration for today’s septic systems. In effect, fast drainage is desirable for the engineering and costs.  However rapid infiltration is a liability for the environment, especially in the coastal zone.

Getting the Water Out 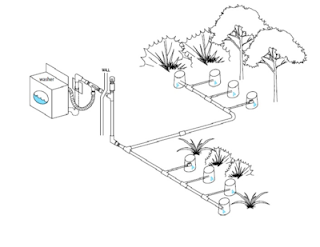 One simple and convenient way to reduce the HLR is to divert the water from the laundry.  Laundry day for a family means many loads of wash.  Some washers use 35-50 gallons of water per load.   This considerable HLR and can overwhelm the system decreasing performance.  In poorly drained soils it means a wet spot in the lawn. On rocky and volcanic lands the water flows downward, and the depth is influenced by the HLR.  Eventually, all the wastewater in   "the coastal waters surrounding the islands will be the ultimate sink for wastewaters”(6).  This conclusion was first published in 1975.  Now some 43 years later, it took a citizens lawsuit provided for by the Clean Water Act to convince government they need to accept that water flows underground and downhill in Hawai‘i too (7).

The performance of any cesspit or leach field is improved by reducing the grey water loading.   This quick fix can buy us time to work on real solutions to the flush toilet problem.  For homes on post and pier foundations, this is a simple plumbing alteration will cost a mere fraction of a new waste system and it may perform better.
Greywater reuse is gaining popularity.  First and foremost it is water that has already been purchased and gets used again to irrigate the landscaping.  It is irrigation water that supplants new freshwater purchase and use. Graywater comes from the washer, the sinks, and the showers.  Kitchen sink water is loaded with organic material from the garbage disposer (another misnomer) and grease and therefore is not added to most greywater systems.  Composting all kitchen waste can render this water useable too.
Greywater reuse is practiced in many states and municipalities, and there is no scientific evidence to suggest that greywater reuse is a real risk to public health.  Recent studies document that greywater is not rife with disease agents (8) and greywater gets delivered to plants shrubs and trees and not likely to be ingested.
To put this issue into a practical perspective, our kitchens have more types and numbers of pathogens than greywater.  The juices from raw meats contain some nasty microbes. In a survey of metropolitan markets, 71% of raw chicken was contaminated with Campylobacter. When ingested it is a significant cause of GI disease(9).  Because we don't eat raw chicken or chew on the kitchen sponge, used to mop us the chicken meat juice, the risk is low. Since no one drinks the greywater; the phobia of a person wearing the engineer’s hat is entirely misplaced.
Where Does Home Wastewater Come From?
In the typical home without water conserving appliances and devices, the toilet generates 18.5 gallons of wastewater per person per day. All this water is used to flush a few ounces of human waste.  It is the single most significant contributor at 26.7%.   The modern low flow toilet generates only 8.2 gallons per person per day or 18% of the daily flow.   The water savings alone will pay for a new toilet.  Look for the WaterSense logo.
According to a recent scientific review, the typical person produces 3.4 lbs of wet wastes or .2 lbs of dry matter waste per day (10). To manage that waste we use 18.5 gallons (154 lbs) of potable water each day.  As we move into drought and greater climate uncertainty and become critically aware how our reefs are impacted by human wastewaters, we need to ask, is the smart?
In WaterSense (11) efficient homes combined with laundry water reuse, we can cut wastewater flow to cesspits and septic systems by about 50%, and it is cost-effective.  Now that is more than smart; it is a wise first step. 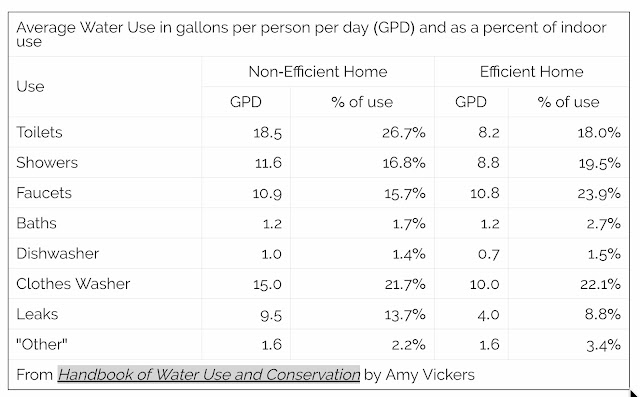 10.  Rose C, Parker A, Jefferson B, Cartmell E. The Characterization of Feces and Urine: A Review of the Literature to Inform Advanced Treatment Technology. Critical Reviews in Environmental Science and Technology. 2015;45(17):1827-1879.