The High Courts Have Spoken:
Discrete Underground Wastewater Discharges Polluting The Sea Are Unlawful
R.H. Bennett Ph.D.
Applied Life Sciences LLC
On Friday, March 30th, the Federal Court of Appeals, Ninth Circuit refused to rehear an appeal of its historic ruling in the Maui County Wastewater injection case (1). The crux of the matter was the legality of injecting large volumes of treated wastewater into wells near the coast in Lahaina Maui under the US Clean Water Act.   The fact that this wastewater found a conveyance to the sea was not contested.  The question was whether or not underground water conveyances were the functional equivalent to a surface pipeline to the sea.   The Court said yes.  It went on to say…..
“At bottom, this case is about preventing the County from doing indirectly that which it cannot do directly. The County could not under the CWA [Clean Water Act] build an ocean outfall to dispose of pollutants directly into the Pacific Ocean without an NPDES permit. It cannot do so indirectly either to avoid CWA liability. To hold otherwise would make a mockery of the CWA's prohibitions. Under the circumstances of this case, we, therefore, affirm the district court's summary judgment rulings finding the County discharged pollutants from its HAWAI‘I WILDLIFE FUND V. CTY. OF MAUI 29 wells into the Pacific Ocean, in violation of the CWA, and further finding the County had fair notice of what was prohibited.”

This ruling means that all such underground dischargers must obtain and comply with the provisions of the National Pollution Discharge Elimination Permit (NPDESrequirements)(2).  For waters like much of our coast that are already pollutant impaired NPDES permits are not likely to be granted (see post “Our Impaired Waters”).

Maui County claimed they did not have fair notice of the law because the Hawai‘i Department of Health refused to make a determination that the county did or did not need to apply for a permit.  The court said the county could understand the simple meaning of the law and could not hide behind the state's unwillingness to take a position.  Since the EPA delegates the authorities of the CWA to the state, the state failed to apply the law.  It remains to be seen if the EPA will penalize the state accordingly.

No doubt there will be significant enamel lost for the gnashing of teeth. We hear mainland groups funded by the likes of the Koch Brothers will try to appeal the ruling to the US Supreme Court.  However, we also understand that the high court is not likely to take it up given the unambiguous language of the Clean Water Act.

Some will promote ambiguity about the law, as if to second-guess the Appellate Court, to confuse and intimidate decision makers.   The far more critical question is what this law means for our community and our oceans.  We need to take responsibility and not abdicate it for another 43 years.

On our island where does all this wastewater go?  Just a few years ago it was the official position of the state of Hawai‘i that the wastewater stayed under the land and did not flow beyond the shoreline.  They stated, "As a matter of policy water underground are waters of the state and not federal waters and therefore not subject to the Clean Water Act."  In effect they were saying water in Hawai‘i does not flow downhill!    Now over ten years later and hundreds of millions of gallons of wastewater draining into the sea the state admits this year and in advance of the court ruling that wastewaters from individual waste systems do contaminate the oceans of Hawai‘i.

As Mink and Lau stated in 2006, the text Hydrology of the Hawaiian Islands (3) page 234, “However the coastal waters surrounding the island will be the ultimate sink for wastewaters, either directly and indirectly." This passage is a quote from a 1975 report on Hawai‘i coastal water quality management by McGauhey and Lau.

Hence it is evident we were on notice in 1975, and we chose to ignore it.  Forty-three years later the court finally makes it clear and unambiguous.  Consequently, how will this play out in the years to come?

Undoubtedly wastewater injection wells will be under the microscope.   Where wells are disposing human wastewaters, owners will need to show that they are not flowing in discrete underground conveyances aka lava tube to the sea. If so they must apply for the Permit.  The Kona Coast is rife with such conveyances.

The aerial infrared photography of Dr. Craig Glenn and Johnson reveals where these conveyances flow cold nutrient-rich waters into the sea(3,4,5).  Photos reveal places in such as Manini Beach and the NE corner of Kealakekua Bay, Kailua Bay, Honokohau, Kaloko and Kukio Bay are examples of such groundwater conveyances.  Glenn estimates that for each mile of coastline 1 to 3 million gallons of groundwater flows into the sea each day from discrete “point source” conveyances.

Surface water testing in real time with the aerial photos, shows this groundwater to be rich in nitrogen and phosphorus.   Why is groundwater nutrient rich?  It is the repository of human wastewater as described 43 years ago.  Modern analytical methods confirm the nitrogen in the water has a human waste isotopic signature as well(6).

Next on the list is the infamous Kealakehe Sump.  The sump is located about a quarter of a mile north of the Kealakehe Police Station and ¾ of a mile East of Honokohau Harbor.  It was built in the mid 1990ʻs as a temporary (two year) disposal site pending its use for golf course irrigation.  The required reclamation aspect of the EPA funding for the treatment plant wastewater reuse was never built. The temporary sump, now over 20 years in use dumps about 1.8 million gallons of partially treated wastewater into the a‘a lava field every day.

Also of grave concern is the fact that the water is NOT disinfected to the State R2 Standard (Hawai‘i Administrative Rules 11-62)?   Is it chlorinated but the level of treatment is not known.  Several studies demonstrate that constituents of wastewater contaminate test wells and groundwater as it enters the harbor at its Northern wall.

The County plans to upgrade the treatment of the wastewater to R1 (the highest standard) and use the water for irrigation by 2020 on golf courses or similar use once again.   At this time agreements to use this water have not been negotiated, yet the county intends to become the purveyor and manager of reclaimed waters for irrigation purposes.   When this comes to fruition, the water and nutrients it contains will produce a grass crop, thereby eliminating indirect discharges to the sea.  As it stands the use of the sump requires an NPDES permit, but the state will likely continue its 20 plus year silence.

Looming larger now is the question of individual or onsite waste systems.   Do cesspools and septic systems contaminate ground water?   Yes, that is well established nationwide(7).  Do cesspools pollute groundwater that flows into the sea? Yes, in many places like Puako, Keauhou, Napo‘opo‘o, Kapoho, and elsewhere there is no question.   It is not likely that each homeowner will need to apply for an NPDES permit for their septic system. However, the state, under the new ruling, may be unable to approve new septic systems where they are shown to contaminate groundwater on its way to the sea.

There is no question septic system conversion is not the solution. We simply not know how to design them to perform for high levels of treatment (8).  Needed are far better treatment systems that discharge water of such high quality that degradation of the ocean and groundwater does NOT occur.   This technology called Membrane Bio-Reactor (MBR) is in use in countries all over the world including our state. (9).  So why are we acting like there is no other option to Septic Systems designs that are over two hundred years old?   The myopia is astonishing.
The court ruling need not be onerous at all.  We do need to get out of our tunnel vision boxes and find solutions that meet the letter of the law but more importantly do what is right for our children’s future and the waters.
Malama Pono 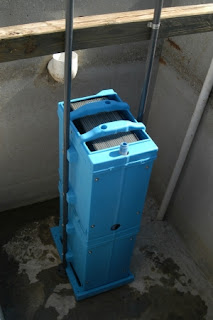 This membrane bio-reactor operates inside of a tank and can produce very high-quality water for landscape irrigation or discharge.  A retrofit system for cesspools may become an option as well.
.