Few if any would suggest even for a second, that the Sun in Hawai‘i is anything but intense.  During outrigger canoe racing season we would hope for the Trade Wind Clouds to shield us from the heat and suns burning rays.  These Ultra Violet B rays and the inflammatory radiation “burn” they cause have ruined days, vacations and even sent people to the emergency room.  To be clear, this is ultraviolet radiation and not gamma radiation as in x-rays.
There are many approaches to preventing sunburn.  The most effective is to simply and completely shade the skin from the sun. However, this is almost antithetical for those on a Hawaiian vacation. 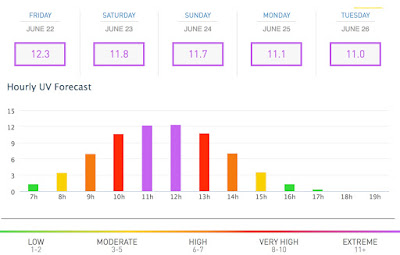 The data on the left is for UV intensity for Honolulu mid-summer. Note that UV radiation is considered “Extreme” from about 10 AM to 1 PM. This is the time to “shade up” or suffer the consequences.

It’s A Good Thing!
Another perspective about UV B rays and our well-being is its daily, powerful and very effective irradiation of the ocean waters.  At first, this may sound like so much gibberish. However, let us shine some light on it.
Nearshore waters of Hawai’i bathe people recreating in the sea.  This bathing rinses human bacteria from all of our nooks and crannies. For surfers, this bathing is more like a high-pressure car wash with each crashing wipe out.  Most people just wade and play in the gentle surf and warm Tropical Ocean. In so doing people and the waves stir up the sand and the potentially harmful bacteria that harbor there. There are far more bacteria like Staph and Enterococci in the sand than in the water column (Goodwin 2012, Yamahara 2012). As the bacteria get suspended in the upper water layer, the UV B can do its job.

This very same ocean is the sea level to which all most all waters from the land are destined.   Waters from the streams traversing the mountain and countryside’s, rain waters from street runoff, sewer waters from old leaking pipes, wastewaters from underground cesspits and septic systems all are on an inexorable flow to the sea. The bacterial loads in these waters are staggering, and a few of the species are known pathogens.   When people are contaminated, or ill their pathogens may well join this water at any place from the mountain to the sea.  It is water that gives bacteria “wings."

Please interrupt any emerging notion of staying out of the ocean forever more and considering Nature’s grand disinfectant is at work to bring some stability to the ocean ecosystem.  The world’s oceans are home to trillion - trillion microorganisms.  This science is so new the microbes have not been named yet.  The vast majority of the ocean microbes play roles in the life systems of the sea.  Nature has a way to manage the burgeoning bacterial populations for reasons scientists have just begun to imagine. 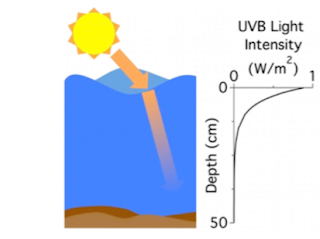 The sun rises, and by 10 AM on most days maximal UV B from El Sol strikes the water penetrating and killing microbes of all types.  Within the first foot or so there is sufficient UV B energy to fracture the DNA strands and in so doing render the irradiated microbes inactive (Maricini 2016, Deller 2006).

More than likely, this solar radiation is killing multitudes of bacteria, including those that can prey on people and this most likely explains why scores of people are not lining up at the clinics with ocean-related infections.  Next time we are inclined to curse the intensely hot sun, consider all the good it is doing to keep the ocean a little cleaner and safer.  However, things appear to be changing.

Things are changing. Safety is Compromised

We use and dispose of much water.  Estimates place personal water use at 80 to 100 gallons per day (USGS 2016).  Ultimately in Hawai‘i, that water finds its way to the sea (Lau and Mink 2006), and it carries what it may along the way.  As the population grows even in remote places more and more, wastewater joins the water cycle.

Obviously human and environmental microbes are part of that flow.  Just as essential is the nutrients; nitrogen and phosphorus get transported in the waters. (See the previous blog on Nitrogen)  It is here that these nutrients and the microbes in water come to play out in a human-made change that compromises recreation water safety.

In brief, water nutrients in lakes and oceans promote microscopic plants.  In freshwater greening is caused by algae. In the ocean, greening can be due to phytoplankton and marine algae.  Greening of these waters is mostly invisible until the plant like microbes become very abundant.  The result is an increase in the turbidity of the water and shading results.   The microbes absorb sunlight and block its penetration and dispersal in the water.  In effect, this provides sunscreen to the bacteria in the water, including those that might make us ill.

The bacteria in the water that might cause infection, like Staph. aureus is present almost always, yet their numbers are modest (Goodwin 2012).  They are low from dilution, settling and the UV B of the sun. Problematically, this microbe is more common within the shoreline sand.  Within the sand, it is fully shaded from the death ray UV B.

Estimating and Measuring Turbidity
Divers have an intrinsic ability to estimate visibility.  It is the opposite of turbidity.  When diving in familiar waters, they know depths, and when they can see the bottom at 100 feet, they know the "vis” is at least 100.  Then on days when the bottom is not visible at all, it is less than 100, and as they dive down and the bottom comes into view at 50 of depth, the "vis” is 50.  It is not very scientific but listening to the stories suggests something is going on.  Local divers seem to agree the “vis” in Hawai‘i is not what it used to be.

To be more objective there are simple to very sophisticated methods for measuring turbidity.  A very visual and informative test that is great for science education as well as scientific studies, employees the Secchi Disc. Merely the disc is lowered into the water on a calibrated rope or field-measuring reel to a depth at which the disc is not visible.
In the photo, the discs are all at the same depth, but the visibility is very different.  The discs are readily homemade and equivalent to the commercial discs (http://www.instructables.com/id/How-to-Use-a-Secchi-Disk-to-Measure-Turbidity-in-a/).
Light penetration is the least in the right photo.  The same can be said for the UV B. 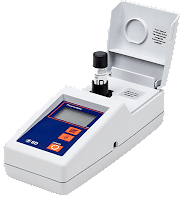 A nephelometer is a more sensitive measurement.  In this device at water sample is put into a special test tube and inserted into the device that measures the amount of light that passes through the water and the corresponding Turbidity Unit or NTU value displays on its screen.

The State of Hawai‘i uses a Nephelometer in its beach-monitoring program. At most beaches on the islands, there are significant turbidity problems.  On the Kona side of Hawai‘i Island, for example, virtually all ocean monitoring sites have excessive turbidity to the extent that it exceeds Federal and State Standards (https://health.hawaii.gov/cwb/files/2013/05/Draft-2016-State-of-Hawaii-Water-Quality-Monitoring-and-Assessment-Report.pdf).
The data indicate that waters from Miloli‘i in the South to Māhukona in the North have turbidity exceedance. 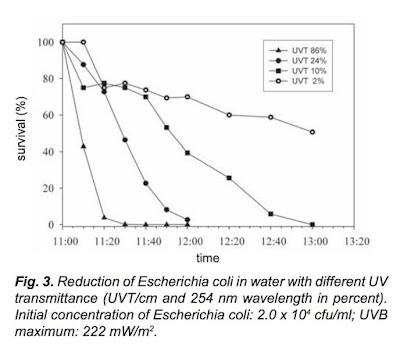 Turbidity is Sunscreen for Germs
In ideal crystal clear waters, UV B can effectively penetrate only a foot or so.   The effective kill rate is a function of the UVB power dose and the duration of exposure.  On clear days the UVB at the beach impacts the surface layer of the water for hours each day.
Simply said, the cloudiness of the water reduces the dose to the extent of the cloudiness or turbidity. Reduced dose means less efficient bacterial inactivation.

In the figure to the right UV kill off of E. coli decreases significantly as the decrease of light transmission or penetration also decreases (Deller 2006).  At 86% UV transmittance and 30 minutes exposure, almost 100% of the E. coli perish.

While this is illustrative and shows the importance of UV B penetration in seawater, it is not bacteria that cause most of the GI symptoms in ocean users. Rather, human enteric viruses are the most common cause of GI disease in general and in ocean recreationists as well. In Hawaiian waters in the dry season, swimmers risk of GI disease was most significant in waters with enteric virus present (Viau 2011).

Thus it is important to review the ability of solar UV B to the latent enteric virus in marine waters rather than the place too much importance on the indicator species like Enterococci.  Many studies reveal Enterovirus can be present in marine waters that contain low and non-actionable levels of the official indicator bacteria. Viau reports no association between the presence of the indicator genus Enterococci and enteric virus.  The team did find a GI disease association with septic system density in the Hanalei Kauai watershed.

Solar UV B inactivation of bacteria and virus in the figure below suggests the viruses are more resistant to the detrimental effect of UV B radiation.  Since viruses are not metabolically active outside the target host cell (humans) their resistance is consistent with the decreased metabolic functions of latent virus. 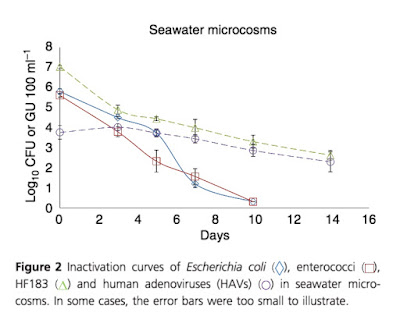 In the chart to the right, the two lower lines represent the bacteria E. coli and Enterococci (Amed 2014).  The upper lines represent virus including Adenovirus. This virus is associated with upper respiratory infections.

The data indicate that the viruses are indeed more resistant to the ambient UV B and take about 8 to 9 days to reach levels associated with lower risk. The UV resistant adenoviruses remain above100 virus particles per 100 ml of seawater at 14 days.

Solar UV light is a very significant microbial biomass regulator of the world’s oceans.  In the tropical nearshore regions, Solar UV B under pristine conditions will limit the numbers of pathogens in seawater that have the potential to cause human infections and harm.

As greater volumes of wastewater migrate to the sea increasing numbers of pathogens, and nutrients will occupy the nearshore waters.  The resulting nourishment of the marine phytoplankton will continue the trend of increasing turbidity.  As turbidity becomes more widespread and consistent, solar UV B inactivation of pathogenic microbes is likely to decline and result in greater exposure and risk to resident ocean users and tourists.

From the side of caution, we must assume turbid waters have increased risk.

We must embrace the reality of this system and cease “punting the tin down the road." We must act on the knowledge that human source nutrients detrimentally nourish the marine phytoplankton. They in turn screen the microbes from the sun, which then fail to be inactivated and create a more significant risk to human health.  We have the ability and remedies, but what about the will?