Are sewers an effective solution to the cesspit?

Are sewers an effective solution to the cesspit?

As the state grapples with the issue of cesspits and their closure, most people assume a sewer system is “the solution” to the problem.  Intrinsic in the question is the functional definition of a sewer system.   To use the term without fully defining the performance requirements is like saying we all need a car.  A car can be a 1957 Volkswagen “Bug” with the roof cut off. It is a car, but it does not serve us well, especially on a Hawaiian cloud burst afternoon.

Neither are we served well with sewers that leak in and leak out. Most all sewers leak.  Engineers worry about this leakage called I and I.   That stands for infiltration and inflow.  When the sewer pipe is in groundwater, including tidal water, water flows into the cracks and other openings in the sewer lines.  Tree roots are a big cause.  Inflow is when surface water often from rain culverts and the like are directly plumbed into the sewer.  This extra water mixes with the sewage, adding cost the sewage management, treatment, and disposal.   Exfiltration of sewage is common, especially in older systems.  In this case, sewage contaminates groundwater and everything it touches.

The figure below depicts sewer defects that allow for leakages  (EPA 1989). 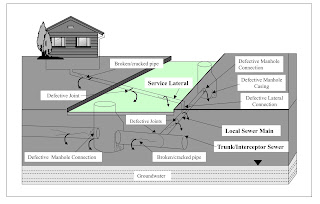 A decade or so ago, we microbiologists would proclaim with utter conviction that fecal bacteria, including those that can make us sick or worse, only grow in the gut and do not survive once in the environment.   My goodness, we were wrong!  Univ. Of Hawaii, microbiologist Roger Fujioka and my team in California, clearly demonstrated that the fecal microbes E. coli and Enterococci survive very well in the aquatic environments.  It looks like they can even reproduce there in temperate and tropical settings.    Thus, sewer spills and routine leakage seeds the environment with these potential pathogens and their persistence in groundwater,  stream and beach sand sediments is quite concerning. Similarly, virologists looking at groundwater found that 94% of the groundwaters under sewer lines tested positive for the human virus.   The likelihood of virus detection was highest in regions with older sewer systems and rainfall events (3).   It is safe to conclude the sewer exfiltration is a source of human pathogens in groundwater.  Where groundwater enters the sea, where people recreate, a higher risk of infection may occur.

The rates of sewer exfiltration are not examined or not published for sewer lines in Hawaii. The general rule from European research is exfiltration increases with the age of the sewer system.  Estimates of exfiltration range from a few percents to over 50.   Thirty percent of total sewer flow is a reasonable exfiltration estimate in well-established systems.

Some sewer systems in Hawaii and almost in every state have been topless VW Bugs.   Sewer lines leak, brake and overflow during rain events.  Treatment plants break, overflow or otherwise routinely discharge treated wastewater that is high in the nutrient’s nitrogen and phosphorus.  Other treatment plants collect sewage from a large geographical area and legally release wastewater from thousands of homes and businesses into a small area via an injection well or ocean discharge.   The recent Federal Court case involving Maui County and its wastewater injection wells is an excellent case in point.  The wastewater injected into the ground near the coast did degrade the nearshore waters and a distinct violation of the Clean Water Act.

In Hawaii, there appears to be an engineering assumption that most all sewer systems are a combination of gravity flow and pump stations.   The latter is necessary to move sewage up hill.   A recent literature review of sewage exfiltration revealed something new.   Two international companies provide vacuum sewage systems to communities all over the world and especially in communities with high groundwater and tidal influences.  In the vacuum systems sealed pipes are necessary to prevent air inflow and in so doing totally prevent in and ex-filtration.  On top of that benefit, they are cheaper to install and maintain than traditional gravity systems.

We are in the process of converting cesspits because they pollute groundwater and the oceans.  Allowing sewer systems to pollute under the simplistic justification they pollute less is a Faustian Bargain. Such a “solution” should be off the table.  Thus, it is critical that we understand the weaknesses and limitations of any centralized sewer system and require performance consistent with the water quality policies of the state.  Otherwise, we risk trading one wastewater problem for another.