Oceanwater and Human Waste: itʻs the Virus!
R.H. Bennett Ph.D.
Applied Life Sciences LLC
Despite the science, a common bureaucratic refrain implies that human waste is teaming with bacteria that cause illness. It is time the EPA boilerplate language of the 1970ʻs is laid to rest.  Modern research data reveals that the bacterial threat is simply not the case.  However, to prevent a disease outbreak such as dysentery caused by Shigella or Salmonella the prudence of prevention is a must.
The bacteria in sewage microbes reflect the people and things in our homes.  Disease-causing bacteria must be consumed to attain residence in the gut, even if only transiently.  Disease risk is proportional to the dose of the microbe consumed.  Most pathogens require thousands to millions per dose in order to cause clinical illness.   The purpose of sanitation is simply a process to reduce the size of the potential dose.  Sterilization, the inactivation of all life forms, is not easy, cost-effective nor desirable.
We sanitize foods with pasteurization, canning, drying, and salting.  We sanitize drinking water with chlorine and the like.  We sanitize hard surfaces, like counter with soap, chlorine, and phenolics like pine sol.  The goal is simply to reduce the bacterial numbers and hence the risk. The commercials claiming a 99.99% kill are very misleading as we will demonstrate.
The same principle holds true for wastewater sanitation. Treatments like chlorination and ultraviolet light treatment reduce the bacterial numbers by many orders of magnitude, and the risk follows accordingly.
Along comes some new research and with some humble pie caveats, we must alter our view for a more conservative narrative about wastewater sanitation.  We have long suggested that it is the virus in wastewaters that presents the real risk.  Whether in the home or at the beach the science of virology tells us we must be more cautious as the virus are more prevalent than we presumed.
The rationale is simple; pathogenic viruses are a disease risk at extremely low doses.  There are only a few viruses that have a known human risk from ingestion.   Just the same, virus like the Norovirus (NV) have a MID or minimal infective dose of just TEN virus or less.   Combine that “talent” and the fact that when infected we shed hundreds of trillion virus per day.  No wonder NV is gruesomely named the “cruise ship virus”.  It can infect thousands of people in the matter of a few days.
Let’s do the math!
To err of the side of caution, let’s assume that just 10 billion virus contaminate someone’s fingers.  That hand reaches for a door and one in ten viruses are deposited on a doorknob.
The knob contains 1,000,000,000 (9 logs) virus.   During the day the vigilant cleaning crew is attempting to kill the virus with chlorine sanitizers advertised to kill 99.999% of virus, or a 5-log reduction, (a log is a power of ten).  Sounds very effective doesnʻt it?
So, after a 99.999% reduction from cleaning, 10,000 viruses remain and contaminate someone else’s fingers. These fingers end up attempting to pick a celery string from the teeth.  In so doing, perhaps only a thousand virus enters the mouth.   Since it takes only about ten to cause illness, it is quite likely the unlucky celery picker will spend the next 48 hours sick with the so-called stomach flu.  Yet for the next week, the person will remain a highly productive fecal virus factory.
Now our attention turns to wastewater sanitation as our recovering stomach flu victim sheds billions of viruses into the sewer system.  What happens now?
Just last year, researchers published a review of the world’s knowledge on virus in wastewater and we need to take heed.  These infectious particles, less than 2/100th the size of bacteria are tougher than microbiologists imagined.  They cannot reproduce outside of a mammalian host cell, but they sure are persistent in the environment.
The summary table below conveys good information that must inform public health policy. Here are some very salient observations: 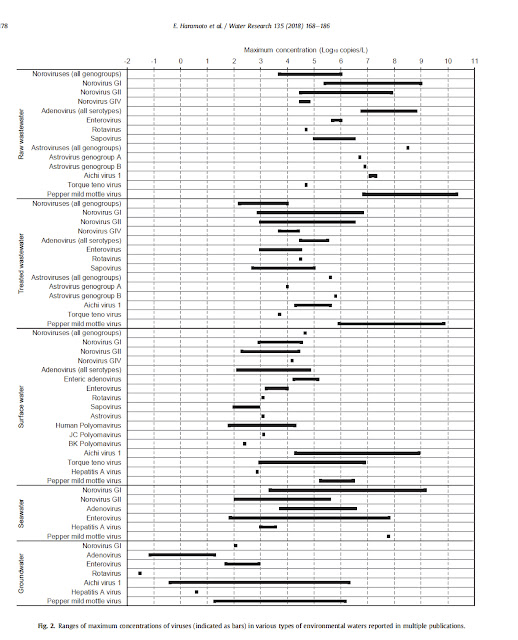 In addition to the Norovirus, there other several other viruses in contaminated water. 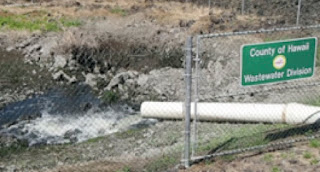 The single largest source of wastewater disposed to the environment is the “Sump” at Kealakehe WWTP at 1.8 MGD (million gallons per day) of partially sanitized wastewater. The State Health Dept has no disinfection requirement for such a discharge.  Given the recent research on virus, they are there until proven otherwise.  The ocean is 2/3 of a mile away.  A positive change is slated for 2020.  At that time water will be treated to the R1 level, which requires a 99.999% reduction of a surrogate test virus.  That may or may not be good enough.   More research is surely needed.
Can we monitor for virus?  Yes, we can, but it is not routinely done and such testing is not official for beach warnings and closures.   The enterococci test that is officially conducted may indicate for the presence of virus when there is a known sewage spill (Lipp 2001).  Otherwise, the enterococci test has no correlation to the presence of human virus (Gerba 1979, Colford 2007).

Lipp, Erin K., Samuel A. Farrah, and Joan B. Rose. "Assessment and impact of microbial fecal pollution and human enteric pathogens in a coastal community." Marine pollution bulletin 42, no. 4 (2001): 286-293.